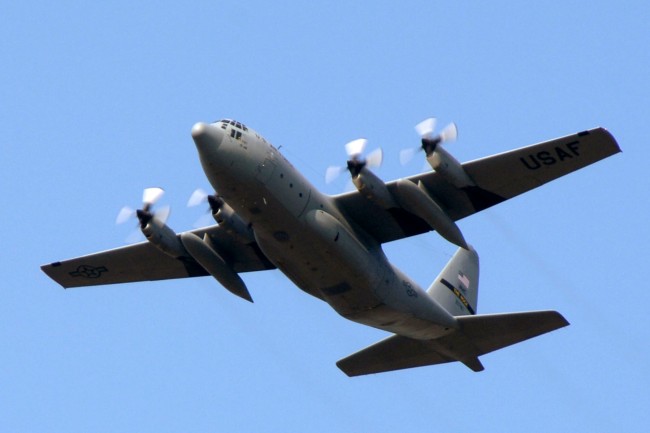 DAYTON, Ohio: SPARE 617 arrives at the National Museum of the U.S. Air Force after its final flight on the 18th of August, 2011. (U.S. Air Force photo by Michelle Gigante)

Parked near the massive hangars of the National Museum of the United States Air Force in Dayton, Ohio is a gray Lockheed C-130E Hercules, serial number 62-1787. A cursory glance reveals a drab, mostly unremarkable aircraft. It looks like one of hundreds flown by the Air Force throughout its love story with the venerable Herc. This sight, however, belies its storied past and a tale of extraordinary airmanship that took place in the skies over Vietnam during the conflict’s latter years.

In the hot early hours of the 15th of April, 1972, airmen scrambled to load up cargo aircraft on the flightline while the pilots, navigators and crewmembers of these big birds finished their briefings and made their way to their aircraft. After a quick but rigorous preflight, three C-130s, assigned to the 776th Tactical Airlift Squadron, taxied out and raised their ramps, preparing for takeoff. As day broke, the flight of three lifted off from Tan Son Nhut Air Base while a massive battle raged on at the town of An Loc. These lumbering aircraft were loaded with ammunition, rations and other vital supplies destined for American and South Vietnamese troops who found themselves surrounded by enemy North Vietnamese units. Earlier resupply efforts proved to be extremely unsuccessful as smaller cargo aircraft (namely C-123 Providers) and helicopters were unable to fly through the tremendous wall of anti-aircraft fire effected by North Vietnamese elements around the town. Spare 617, the third aircraft in the three-ship flight, was piloted by Capt. William Caldwell and Lt. John Hering, crewed with a navigator Lt. Richard Lentz, flight engineer TSgt. Jon Sanders and loadmasters TSgt. Charlie Shaub and A1C. Dave McAleece. Their drop zone for this mission was a soccer field within easy reach of the allied forces on the ground. This afforded them plenty of open space for a low pass and the subsequent jettisoning of the valuable cargo. Upon reaching the outskirts of An Loc, the first C-130 in formation swooped in low and unloaded its pallets without taking significant damage from the guns on the ground. The second in the flight aborted and pulled away sharply when its ramp froze while opening. By this time, NVA soldiers had their machine guns aimed up at the sky, seeking out any American aircraft they could sight and unleashing a steady stream of fire at anything that moved.

It was Spare 617′s turn to make the drop and get out before it took more fire from the NVA guns that were already in the process of riddling the aircraft with lead. The early morning haze blanketing the town made it difficult for Caldwell and Hering to line up on a suitable approach to initiate the drop, so both agreed to maneuver around and try again. Radioing in their intentions to the other aircraft, they pushed the throttles forward and banked away to attempt the pass. Finally managing to bring the Herc into position with the drop zone right ahead, and less than half a minute out, Spare 617 proceeded forward, dropping in altitude as their loadmasters readied the cargo pallets to be dumped out the back. As this was happening, NVA 37mm anti-aircraft cannons opened up and peppered the low-flying Herc with deadly accuracy, instantly killing TSgt. Sanders and wounding both the copilot and the navigator. Adding to the mayhem caused by the AA guns, bullets that penetrated the cargo hold tore into the airdrop pallets containing artillery rounds, setting them and the interior of the aircraft ablaze and further wounding loadmaster McAleece. Subsequent bursts of fire from NVA gunners had ripped into the left engines of the aircraft, rupturing high pressure bleed air lines. Bleed air lines reroute hot air from the engines, preventing their overheating. These broken lines caused the ducts to vent directly into the hold, exacerbating the inferno and severely burning loadmaster Shaub. Like a scene out of hell, two pallets within the aircraft lit up while the remaining load was successfully airdropped onto the soccer field as the stricken Herc pulled away. Shaub, grabbing a fire extinguisher put out the fire in the hold, burning his hands when coming into contact with the red hot barrel of the extinguisher. Shaub and Lentz then worked to open up the cockpit windows and escape hatch to clear the smoke out of the cabin. As they were doing so warning lights indicating failure and fire. Caldwell, Hering and Lentz shut down the two troublesome left engines and the previously mentioned bleed air duct, leaving them just the two on the right wing to fly on. The C-130 was barely limping along by now.

Caldwell, taking charge of the situation with a calm and collected demeanor, decided to attempt to return to base instead of crash-landing on a flat surface, knowing that Tan Son Nhut had the medical facilities that his wounded crew so desperately needed. Gently nursing into a bank, he pointed the burnt and battered Herc towards the air base and limped on. Nearing the air base, the landing gear failed to extend, the fault of a circuit breaker which had been disabled by .51 caliber DShK anti-air guns. McAleece manually worked a hand-crank with the assistance and instruction of Shaub, dropping down the gear. Complicating matters even further was the failure of a third engine on the right wing, rolling back the Herc to nearly thirty percent power overall. Caldwell, with serious coaxing, brought the aircraft onto final approach and landed, veering into a high-speed turnoff along the runway before coming to a halt.

Charlie Shaub was nominated for the Medal of Honor but instead received the Air Force Cross, an honor awarded to those who display exemplary and extraordinary heroism in combat while serving with the United States Air Force. William Caldwell was similarly awarded the Air Force Cross for his excellent airmanship and bravery. The survival of the C-130 was not only a testament to the phenomenal flying and crewing of Caldwell, Hering, Lenz, McAleece and Shaub, but also to the ruggedness and versatility of the aircraft itself.

Aircraft 62-1787 was removed from service, repaired, refitted and returned to service with the Air Force’s 314th Airlift Wing at Little Rock Air Force Base in Arkansas before being assigned to the Arkansas Air Guard. It was temporarily returned to active service before being officially retired to the Museum of the USAF on the 18th of August, 2011. Retired Colonel William Caldwell was on hand to witness his former C-130 land for the very last time and taxi up to its retirement ceremony.

Ian is the managing editor of TACAIRNET. You can find his work on Military Times, Business Insider, We Are The Mighty, Real Clear Defense, and more.

by Ian D'Costa in In History

Early F-14 Tomcats had serious issues with maneuverability, especially during close-in engagements or dogfights. When the aircraft was positioned at a high angle of attack, the pilot would lose control and the Tomcat would likely enter a spin, sometimes forcing the flight crew to eject as the spin would become unrecoverable. Considering that the [read more...]