A YF-23 prototype at the Western Museum of Flight in Torrance, CA. Copyright: Alan Kenny, 2013

In January of this year, Northrop Grumman let word slip that they were planning on developing a sixth-generation fighter for the U.S. Air Force, serving as a third competitor between established fighter giants Boeing and Lockheed Martin. This shouldn’t really come as a surprise to anyone, especially considering the involvement Northrop and Grumman (prior to their merger) had in the military aviation world. Northrop was responsible for the stealthiest strategic bomber, the B-2 Spirit, and they’re back at it, vying for the USAF’s Long Range Strike Bomber contract. Grumman brought about one of the most beloved fighter jets of all time, the F-14 Tomcat carrier air defense aircraft. That pretty much speaks for itself.

Currently, the American Department of Defense has two 6th generation projects planned- the Next Generation Tactical Aircraft (for the USAF, replacing the F-15C/D Eagle and eventually the F-22 Raptor), and the Next Generation Air Dominance fighter (for the USN, replacing the F/A-18E/F Super Hornet). Tom Vice, president of Northrop Grumman Aerospace Systems, was clear with Defense News that NG would be exploring radically-different designs, challenging the conventional architecture we’ve seen thus far F-15s, F-16 Fighting Falcons, F-22s and F-35 Lightning IIs, just as they did with their YF-23 Black Widow prototype when competing against Lockheed Martin’s YF-22 during the Advanced Tactical Fighter competition. NG has two separate teams working on proposals for both the Air Force and Navy next-gen fighters, which will be distinct from one another. That last sentence probably elicited a huge sigh of relief from those of you who maintain a degree of frustration with the Joint Strike Fighter program. 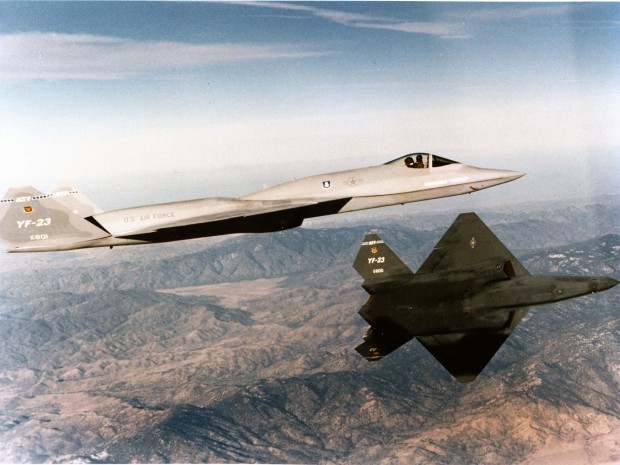 In fact, if you’re wondering what NG’s fighter concept will look like, you probably won’t have to look very far. In developing a next-generation fighter, defense contractors take a look at the aircraft they want to eventually replace, and build upon its strengths while mitigating weakness. In the case of the F-22, Lockheed Martin took a number of cues from the McDonnell Douglas F-15C/D. The F-15 itself was the progeny of F-4 Phantom II, the first true air superiority fighter. So it only makes sense that to develop the sixth generation of air superiority fighters, Northrop Grumman will look to their near-win candidate of the fifth generation.

The YF-23 was by all accounts a very capable aircraft, though the Air Force judged it to be a risky investment. Co-built with McDonnell Douglas, it was stealthier than its competitor, and could achieve higher speeds, especially while supercruising. The exact figures are classified at the moment but that should still give you an idea of what Northrop Grumman is capable of. Maneuverability, however, was another issue that led the Air Force to choose the YF-22, which featured two-dimensional thrust vectoring giving it unparalleled supermaneuverability, a factor that gives the Raptor the edge in dogfighting. Northrop Grumman’s Next Generation Tactical Aircraft proposal could, therefore, very well be a reworking of the YF-23, with newer computers and more advanced weapon systems, stealthier skins and powerful engines. Time and time again, just as we’re about ready to give up on close-in dogfighting, it becomes all the more relevant. So multi-dimensional thrust vectoring might just be another capability of the proposal. In addition to his mention of NG exploring a tailless design, Tom Vice also hinted at the possibility of fielding optionally-manned fighters as well. Lastly, the U.S. DoD has, in the recent past, indicated that directed energy weaponry (a.k.a. lasers) could potentially be ready to be deployed aboard smaller aircraft by the time the 6th gen Air Force and Navy fighters are fielded. Need I say more?

Life After the Warthog

“There’s only so much you can get out of that airplane,” Carlisle said. “Those airplanes are gonna wear out. They’ve been worked very, very hard. They’ve done incredible things for us. But eventually that platform is going to age out.” -Gen. H. “Hawk” Carlisle, USAF Over the past 15-16 months, [read more...]