Laser-guided bombs line the flight deck of the aircraft carrier USS JOHN F. KENNEDY (CV-67) in preparation for air strikes against Iraq during  Operation Desert Storm. The A-6E Intruder aircraft in the background is armed with laser-guided bombs.

YouTube is chock-full of epic pranks pulled by our fighting men and women on each other to alleviate the inevitable boredom that comes along with life in the military. The other day, after a long chat with an old friend who served as a pilot in an antisubmarine warfare (ASW) helo squadron in the US Navy, I was driven to find footage of a particularly hilarious caper pulled by a helicopter crew from the USS America (CV-66), back in 1986. I finally came across the video and it was just as funny as Terry described it. Of course, it’s old and the camera’s not exactly anything close to high-definition… but watch and howl as flight deck crew aboard the USS John F. Kennedy (CV-67) are sent scrambling after a bunch of greased up, painted pigs, set loose onto the flight deck by the aforementioned helo crew. The caption that came with the video indicated that the devious prank was cooked up by a bunch of fighter pilots aboard the America as a parting gift to the Kennedy when the latter relieved the former in the Mediterranean Sea during a deployment. The original video was shared by Brian Christoff. According to Brian Michaels, a former search and rescue swimmer/aircrewman with Helicopter Anti-Submarine Squadron ELEVEN (HS-11, aka the Dragon Slayers), deployed aboard the USS America, and it was an HS-11 helo which ferried the painted/lathered pigs across to the JFK under the pretense of dropping off some paperwork. 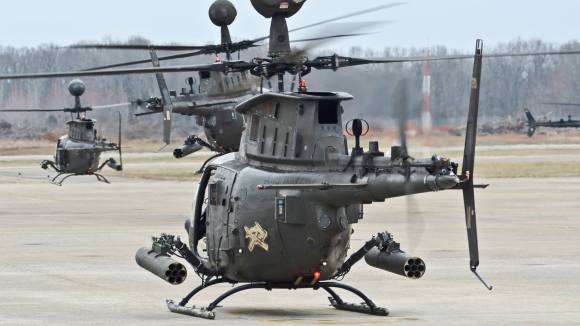 Scouts Out! 7-17 CAV Flies Its Last Training Evolution with the OH-58D