September 1st, 1974, was pretty much just another average day for New Yorkers. It didn’t look like either the Yankees or the Mets would make the playoffs (neither did), and the temperature was in the high-70s (Fahrenheit) at the tail end of yet another long, hot summer. Most were unaware of what was unfolding in the skies above them at altitudes closer to the edge of space than the regular cruising heights of the glistening airliners belonging to Pan Am, TWA and other carriers of the time. Controllers on the ground at LaGuardia Airport and John F. Kennedy International Airport were well-informed ahead of time of what would soon be streaking over their heads, departing just as quickly as it appeared.

Meanwhile, Majors James V. Sullivan and Noel F. Widdifield, the pilot and reconnaissance systems officer (RSO) respectively of the sleek black jet ripping through the airspace over New York, were steeling themselves with mere seconds left on the clock before they began a record-setting flight- the fastest Transatlantic crossing in history. Their chariot was none other than the fastest manned jet in history (at least that we know of), an aircraft that looked more like something out of a science fiction comic book than a conventional design that would come off the drafting tables at one of the most well-established aerospace corporations in the country. Their Lockheed SR-71A Blackbird, serial number 64-17972, was slated to function as a static display showpiece at the Farnborough Air Show for a week- the very first time the top secret spy plane was shown off outside the United States. US Air Force and Lockheed Corp. officials had agreed to and planned the flight over, which would see the the Blackbird cross imaginary gates over New York and speed over to another set of imaginary gates set up over London. At the time, New York City-to-London was arguably one of the most popular Transatlantic routes available to travelers; at least those who could afford it. Airlines regularly strove to decrease the time taken to travel between the two cities, culminating in the introduction of Concorde, the supersonic delta-winged European airliner which was retired just 12 years ago. The Concorde still holds the record for the fastest airliner crossing of the Atlantic Ocean, with a time of 2 hours, 52 minutes, 59 seconds, right from takeoff at London Heathrow International (LHR) to John F. Kennedy (JFK) in February of 1996. However, it still doesn’t come close to what Sullivan and Widdifield were able to pull off that September day, 22 years before Concorde’s record-setting flight.

US Senator Barry Goldwater was responsible for bringing about the Transatlantic crossing, after having flown as a passenger in a Blackbird himself. Having retired from the Air Force Reserves in 1967 as a Major General, and possessing significant political clout due to his lengthy career as a politician in Congress, Goldwater was able to convince then-US President Gerald R. Ford to allow the Air Force to fly a Blackbird to Farnborough for the rest of the world to see, thus demonstrating the power and might of American innovation and engineering. When Ford approved of the trip, the Blackbird’s parent wing’s commanding officer picked out two crews to fly one of his birds to and from the air show. Though the SR-71 wouldn’t be performing its usual reconnaissance overflights, operations personnel planned out the whole event as though it was a regular mission. Air bases for emergency diverts were assigned, radio frequencies for tanker and ground control communications were listed and no detail was left out.

The Blackbird, belonging to a reconnaissance squadron in California on the west coast of the United States, was slated to link up with a KC-135Q Stratotanker, one of a specially-modified fleet available exclusively to support the Blackbird program. Being that the Blackbird was already at approximately 2000 miles per hour when crossing the New York gates, it needed a minimum of one in-flight refueling, thanks to the astonishing amount of fuel it consumed while in afterburner. The route was calculated at around 3461.53 miles, and radio coordination between controllers in New York and London would ensure the highest degree of accuracy in timing the Blackbird’s flight across. Having already surged across the Atlantic in a sustained supersonic cruise at speeds in excess of Mach 2.5-2.6 (the Blackbird was actually capable of hitting Mach 3.5, and cruising at around Mach 3.2-3.3), Sullivan began a descent that would bring him to the only refueling point of their mission. After tanking up, the duo climbed away and once again nudged the throttles ahead. The time taken up by the in-flight refueling was deemed virtually negligible when the Blackbird flew through the London gates. Overall, the flight had taken 1 hour, 54 minutes and 56.4 seconds, and maintained an average speed of about 1807 miles per hour. Just about an hour less than what the Concorde would accomplish 22 years later. Upon observing his brainchild set the Transatlantic speed record (which still remains today), Clarence “Kelly” Johnson, who was flown over to Farnborough to receive the aircraft upon its arrival, proudly remarked, “It has exceeded all my expectations.” 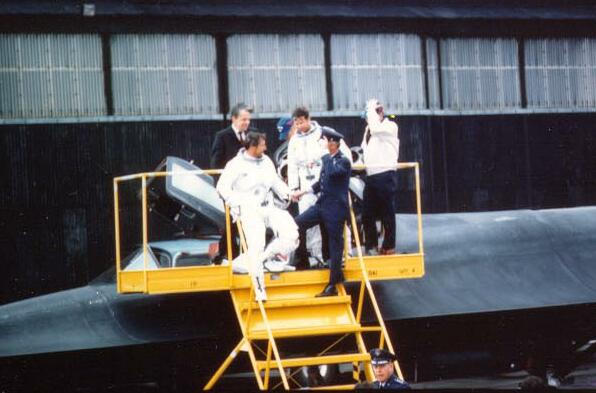 The exact same Blackbird, flown by a different aircrew (Captain “Buck” Adams and Major William Machorek (pilot/RSO)) for the return flight to the US, set yet another speed record by flying from London to Los Angeles (5447 miles) in 3 hours, 47 minutes and 39 seconds at an average speed of 1435 miles per hour. If the Federal Aviation Authority and the Air Force hadn’t imposed speed restrictions on the aircraft, especially over a number of US cities it flew over on its run, the time it took would have probably cut down even further. Even with the restrictions put in place, local police departments and military switchboards were lit up with reports of sonic booms and resultant shattered windows. Years later, the very same Blackbird would once again set a number of records including the fastest time for a Los Angeles-to-Washington, DC cross-country route on its very last flight to its current resting place, the Smithsonian’s National Air and Space Museum. On March 6th, 1990, Lieutenant Colonels Ed Yeilding and Joseph Vida (pilot and RSO respectively) flew Blackbird 64-17972 from Palmdale, California to Dulles International Airport, just outside of DC, averaging 2124 miles per hour and finishing the flight within 1 hour, 4 minutes and 20 seconds; another record that hasn’t been broken and likely will remain in place for years and years to come. This also happened to be the last SENIOR CROWN (the USAF’s official name for the Blackbird program) flight in history. Today, 64-17972 sits on permanent display at the Smithsonian’s Udvar-Hazy annex to the National Air and Space Museum.