Norway’s first F-35 pilot is the latest to step out and speak favorably on the oft-derided stealth fighter jet, this time in a post on Kampflybloggen (The Combat Aircraft Blog), maintained by the Norwegian Ministry of Defence. Major Morten Hanche, callsign “Dolby”, isn’t just your run-of-the-mill fighter pilot, however. A graduate of the US Navy’s Test Pilot School (USNTPS) at NAS Pax River, with over 2,200 hours in an F-16 Fighting Falcon (the current backbone of the RNoAF’s fighter force), Hanche now flies and instructs on the F-35A Lightning II as part of the 62nd Fighter Squadron, based out of Luke AFB, AZ.

A supposedly damning report, leaked to the media in mid-2015, saw a scathing review of the F-35’s performance in air-to-air combat versus a “two-bag” F-16 (i.e. a Viper loaded with two drop tanks). The unnamed test pilot stated, among other things, that the F-35 “was at a distinct energy disadvantage”, losing out to the F-16 in basic fighter maneuvers (BFM), thereby giving ammunition to the F-35 program’s most vocal critics… which is virtually the entire media these days. But Hanche, himself a test (and now instructor) pilot in the program, begs to differ.

Having flown a number of mock dogfight-type sorties in F-35As, Hanche focuses on what happens when the fighter is hypothetically engaged in such a situation outside the training envelope. As a test pilot with significant experience in the F-16, he uses the older fighter as his point of reference to discuss what he has learned with the newer 5th generation multirole fighter, and what he knows the F-35 is capable of doing. His conclusion is that  the F-35 allowed him “to be more forward and aggressive than [he] could ever be in an F-16.”

Hanche has previously written on Kampflybloggen about the likelihood of F-35s being engaged at closer ranges, and how the aircraft’s advanced sensor suite and radar diminishes the probability of this occurring. However, when an enemy fighter manages to get closer to the F-35 than its pilot would prefer, is the aircraft, for all intents and purposes, a flying duck? Hanche unequivocally says “no!”

In “typical” training exercises, which see the fighters close and engage at a range of anywhere between one to three kilometers, the pilots of said fighters are to use any means necessary to “kill” their opponents, including deploying missiles or using their onboard cannons. In such a real-life simulation, the F-35 allows Hanche greater control authority than the F-16 does, thanks to the F-35’s higher Angle of Attack (AOA). He can thus deploy his weaponry earlier in the fight than he would be able to with the F-16, which itself is still a very highly-maneuverable fighter. This effect doubles up, when it also forces his opponent to react defensively,  bleeding off energy quickly and allowing him to keep his nose pointed at the bandit (hostile fighter). The incredibly powerful Pratt & Whitney F135 turbofan allows him to regain that energy very quickly, as the need arises.

“Classic maneuvering towards the control position with an F-16 (blue arrow); the offensive aircraft moves to reduce the difference in angle, and to end up behind its opponent.” -Hanche

“The offensive (blue arrow) chooses a too aggressive approach, and ends up being neutralized by its opponent.” -Hanche

When the F-35 is confronted and forced into a defensive situation, Hanche says that he is perfectly capable (due to the F-35’s aerodynamics) of slowing down and maneuvering enough to reverse the roles between attacking and defending in his favor. Using higher angles of attack than the F-16 is able to achieve, the F-35 can turn the tables around and force its attacker into reacting defensively.

Hanche notes that the F-35 is a vastly different aircraft than the 4th generation F-16, which it is designed to replace. It does indeed come with its own set of issues, including reduced cockpit visibility, which can be problematic during BFM. However, Hanche has managed to mitigate the blind spots caused by the ejection seat headrest simply by leaning forward and sideways before turning his head, allowing him to see behind the seat. The F-16 still has greater cockpit visibility, but all is not lost with the F-35.

I would emphasize the term “multirole” after experiencing this jet in many roles, and now also in a dogfight. The F-35 has a real bite! Those in doubt will be surprised when they finally meet this «bomber”.

At the end of the day, the F-35 program does have major shortcomings, especially with cost overruns and delays. While it makes sense to pay attention to those issues, especially considering the hypothetical $1.5 trillion USD lifetime cost (over a +50 year lifetime), it’s also necessary that we take note of what the F-35 can do that current generation aircraft can’t, just to keep the debate fair and balanced. As far as Hanche and most other pilots in the F-35 program feel, given their experience in the fighter, it’ll be more than capable of handling whatever is thrown at it once it reaches active service with the air forces of the countries who are slated to procure it. 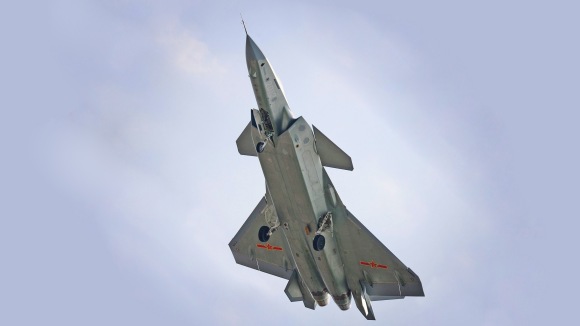 China is apparently in the process of testing out the Chengdu J-20, the country’s first ever fifth-generation stealth fighter, in the Tibetan mountains, confirmed by a somewhat grainy image of a J-20 covered in infrared camouflage netting. The image, shared to social media over the past three days, was taken at Daocheng Yading Airport (DCY), [read more...]