The Lockheed U-2 Dragon Lady was arguably one of Clarence “Kelly” Johnson’s finest Cold War innovations. Able to fly at altitudes in excess of 70,000 feet, the U-2 was America’s go-to aerial platform for photographic reconnaissance overflights of the Soviet Union and other communist countries, at least until the advent of the SR-71 Blackbird, another one of Johnson’s incredible creations. Built with fantastic endurance, a high service ceiling which necessitated the use of a bulky pressure suit similar to what astronauts wear, and high-definition film cameras, the U-2 could perform exactly as the US Air Force and Central Intelligence Agency asked of it… up to a point, of course.

But the one thing Kelly’s wonder-bird couldn’t actually do very well was land.

Far more similar to a glider than a conventional aircraft, the U-2 has massive wings which were optimized to generate as much lift as possible. This would allow it to climb quickly to its operating altitude, retain said altitude, and essentially half-glide through its missions, conserving fuel and boosting its range dramatically. But at slower speeds, these wings were still able to generate a hell of a lot of lift, especially at lower altitudes thanks to the ground effect. Simply put- the ground effect is an air cushion of sorts that forms under aircraft flying close to the ground. Higher pressure forcing against the undersides of the wings buffets the aircraft and reduces the stall speed, allowing it to float above the runway.

Thus, with its big wings, the U-2 experienced the ground effect in a big way the landing/recovery phase at the end of missions. This means that pilots would have to deliberately stall the aircraft as close to the runway as possible, killing off the lift underneath their wings, and dropping the plane like a rock the rest of the way. But this isn’t actually as easy as I just made it sound. There’s a reason the U-2 is known as the most difficult aircraft to land in US Air Force.

In addition to the ground effect increasing the difficulty of landings, the U-2’s centerline-only landing gear forced the requirement that each and every landing had to be controlled extremely precisely and very carefully, for fear of bouncing the aircraft or tipping it on its side and veering it off the runway. To complicate matters, the U-2 was built with a control setup that allowed for a higher degree of flight control authority at higher altitudes. Generally, this is a good thing as mere minutes are spent at lower altitudes on a typical U-2 sortie. But when landing, this is a bad thing. This unique setup makes it an almost-Herculean task to manipulate the yoke of a Dragon Lady, hence why U-2 pilots need to possess significant upper body strength. But wait… there’s more!

The cockpit’s visibility is also fairly (or maybe unfairly?) limited, further worsened by the fact that pilot wears a bulky pressure suit and a pressurized helmet which restricts his visibility even more so than ever before. The problem, at the time of the U-2’s advent in the late 1950s was that the Air Force and CIA desperately needed the spyplane to make up for the shortcomings it experienced at the time with its photo-reconnaissance-capable fleet. Initial designs called for the U-2 to not have any landing gear whatsoever, but Kelly Johnson wasn’t having any of that. His final design called for the aforementioned centerline landing gear, but also removable outrigger gear, which are jettisoned during takeoff, and donned once more after a successful recovery. To help U-2 pilots land, the military needed a vehicle that could match the landing speed of the U-2, keeping pace with it all the way through its approach, float, and landing.

The U-2 needed a chase car.

The first cars the CIA bought for the U-2 program were picked up incognito, straight from unwitting dealerships in Nevada. The guiding philosophy, at the time, was that the bigger the engine, the faster the car would be. Thus, Ford station wagons with hefty V8 engines were ferried to the legendary Area 51 test site at Groom Lake, Nevada by aliens in spaceshi… just kidding.

But once those cars made it to the military base that, up til very recently, did not “exist”, they were refitted with radios and antennae that would allow it to communicate with the pilot in the U-2 during the landing phase, and to guide him in for a safe touchdown. These cars were typically driven with a qualified U-2 pilot at the wheel or in the front passenger seat, constantly on the radio calling out the aircraft’s attitude, its altitude and letting the pilot know of any corrections he needed to make in order to ensure the aircraft’s safe recovery.

Going into the 1960s, Ford wagons were soon replaced by Chevrolet El Camino coupe pickups painted in Air Force blue, also replete with powerful V8 engines, which would usually carry the outrigger landing gear in the back and were also outfitted with the radios required to communicate with U-2s on landing. The El Camino quickly became the standard chase vehicle of the program, serving into the 1980s in that role. When U-2s were forward-deployed to U-Tapao Air Base in Thailand in the early 1970s, the Air Force brought over a few souped-up 1968 El Caminos Super Sports  because the U-2 just couldn’t land well enough without them. 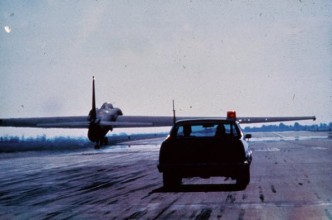 A USAF El Camino chasing down a recovering U-2. (Author unknown) 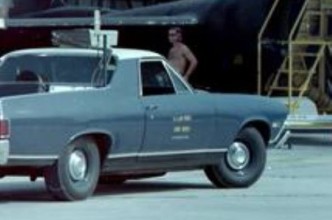 In 1985, the Air Force upped its car game. When exploring replacements for the El Caminos, the USAF decided to temporarily requisition a California Highway Patrol (CHiP) Ford Mustang, built to pursue cars at high speeds on the highway. Built with the “Special Service Package” (SSP), these Mustangs were easily able to outdo the El Caminos and then some. The Air Force bought a bunch and had them shipped out to every air base the U-2 would operate from, including bases in England and Japan. These Mustangs received the customary gray paint job, and were equipped with radios, and a flashing orange roof light bar, but no further modifications, even to the engine.

By the 1990s, the Mustangs were due to be replaced. Most racked up anywhere between 40,000 to 60,000 miles on their odometer before they were pulled from usage and replaced with the Chevrolet Camaro B4C police interceptor. Also carrying on the V8, trend, these new Camaros served their way into the early 2000s, when they were supplemented and then outright replaced by a variety of vehicles. Since then, the USAF has used Pontiac GTOs, Pontiac G8s, the Chevy SS, and most recently, the latest-generation Chevy Camaro. When U-2s are deployed around the world, a pair of chase vehicles will either be flown on-deployment with the U-2s in a C-17 Globemaster III or a C-5M Super Galaxy, or the Air Force leases out Audi or Mercedes Benz sports cars, especially in Europe. Pilots who qualify the U-2 are now also required to go through a course near Beale Air Force Base, California, to learn to operate and handle cars at high speeds.

Today, little has changed with U-2 landing procedures, except the chase cars themselves. Chasers, referred to as “mobiles” are used for both landings and takeoffs. The car, still driven by a U-2 pilot, is positioned near the runway the aircraft is about to alight on, engine revving, driver patiently waiting. When the U-2 passes the runway’s threshold, the driver accelerates, roaring in behind the aircraft now gliding over the asphalt. With one foot on the gas rocketing the mobile above 100 miles per hour (and up to 130-140 mph at times), one hand on the wheel and the other gripping a radio handset, the pilot in the mobile calls out the numbers and estimations the U-2’s pilot needs to know, as they both coordinate the landing. Not an easy feat for either. Behind both the U-2 and its mobile, a utility truck speeds up with a rack of outrigger wheels, called “pogos”. Crew jump out and run to the aircraft, now balancing like a bicycle and slowly leaning to one side. The wings are held steady, while the outrigger gear are clipped on, stabilizing the U-2, and the recovery is complete.

The U-2’s days in the Air Force are numbered, and its curtain call is fast approaching, as much as its pilots and crew hate to admit it. But for the foreseeable future, as long as she flies with US Air Force markings, the U-2 will always have a fast companion guiding it through every single approach and landing it’ll ever perform.

15 thoughts on “Chasing the U-2 Dragon Lady”