When you’re the reigning monarch of a country that possesses one of the world’s most diverse and storied air forces, you’re probably going to be on the receiving end of an incredible flypast for your birthday. Queen Elizabeth II, surrounded by her family, will be the primary spectator at what might be the largest flypast in the western hemisphere this year to mark her 90th birthday (which, by the way, was actually in late April).

On Saturday, June 11th, the Royal Air Force will perform a 31-ship flyby featuring fifteen types of aircraft currently operated by the RAF, including the Supermarine Spitfire and Hawker Hurricane operated by their heritage flights. Beginning at 1300 hours local time, the formation flight will consist of eight elements, passing over Buckingham Palace in London in intervals of thirty seconds.

This incredible sight is one you really don’t want to miss, if you live in the area. The first wave consists of four aircraft from four squadrons which are actually celebrating their 100th year anniversaries this year, followed by the Battle of Britain Memorial Flight’s Hurricane and Spitfire. Immediately behind will be a C-130 Hercules whose parent squadron is also celebrating 100 years of service, flanked by a pair of Beechcraft King Air trainers.

An RAF Airbus A400M airlifter will be right behind, followed by yet another C-130, and a C-17 Globemaster III. This part of the flypast represents the RAF’s strategic and tactical airlift capabilities, supporting the British military and allies throughout the world. One of the royal family’s own private aircraft, a BAe 146, will be tagging along for the ride as well. 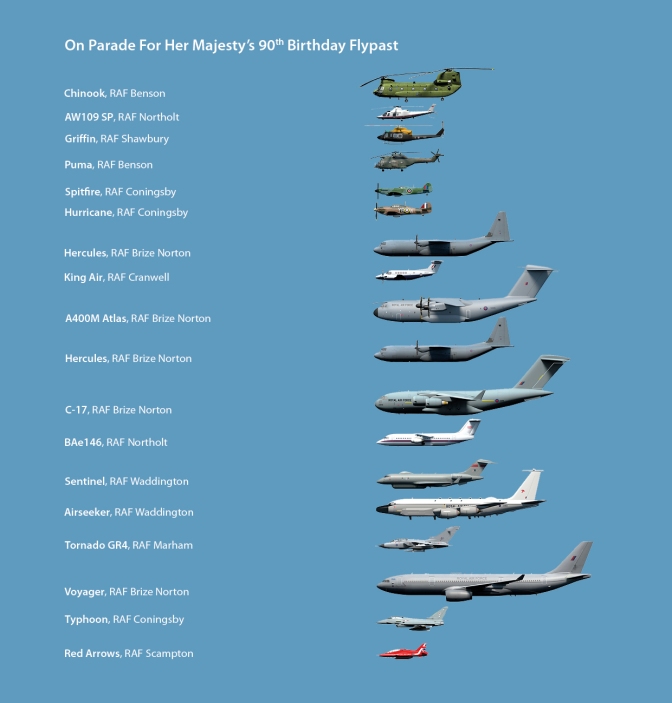 An RC-135W Airseeker, one of the RAF’s latest acquisitions, will also be flying. Essentially the same as the RC-135 Rivet Joint, operated by the US Air Force, it functions as a signals intelligence platform with advanced sensor and communications suites. A Raytheon Sentinel will also be flying in the long march of aircraft, belonging to No. 5 Army Cooperation Squadron. An Airbus A330 MRTT Voyager, the largest aircraft operated by the RAF, will join the flypast, along with Tornado GR.4 strike fighters and Eurofighter Typhoon air superiority fighters. To cap off an afternoon full of jet noise, England’s Red Arrows flight demonstration team will fly in formation behind the entire procession, rendering honors to the queen.

Sadly, the glorious Avro Vulcan (still flightworthy), whose flew for the last time last year, and the Avro Lancaster also operated by the Battle of Britain Memorial Flight, will not be taking part this year.Without any doubt, the flypast, with the numbers and diversity of aircraft involved in the flypast, will be hellishly expensive. But when you’re the longest ruling monarch of the United Kingdom, and arguably one of the most beloved figures in the world, it’s okay to rack up a high bill for your 90th birthday. 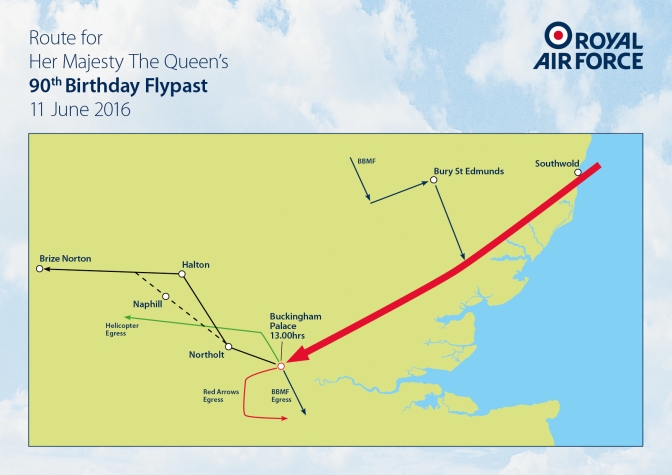