China is apparently in the process of testing out the Chengdu J-20, the country’s first ever fifth-generation stealth fighter, in the Tibetan mountains, confirmed by a somewhat grainy image of a J-20 covered in infrared camouflage netting. The image, shared to social media over the past three days, was taken at Daocheng Yading Airport (DCY), which also happens to be the highest-altitude airport in the world. Given the region and its unique placement inside one of the largest mountain ranges in the world, it could be safe to assume that the J-20 is there primarily for high altitude testing, among other things, according to Russian military expert Vassily Kashin. 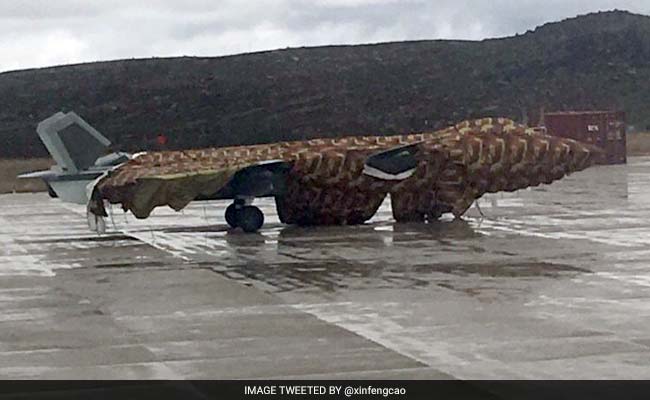 The Chinese military, of course, immediately moved to deny any notion of an actual military deployment of the J-20:

“It is said that J-20 will be put into service soon but the China-India border is apparently not the ideal place for its deployment. In addition, the world’s highest airport there does not have a complete set of supporting facilities and such shortage will impede the function of J-20”.

However, the statement published on China Military Online did attempt to provide a very sanitized explanation for the J-20’s presence at Daocheng Yadeng, saying that such a deployment “may turn out to be a high altitude performance test to accumulate test data and experience for operations in plateau areas”. Considering the proximity of Tibet to India, one of China’s biggest rivals in that corner of the world (though the Chinese constantly refute that contention), a J-20 (or potentially, a pack of J-20s) could spell out “international crisis” very quickly for both nations. So that explains the lightning-fast public affairs statement from the People’s Liberation Army Air Force (PLAAF; China’s air force) published yesterday.

So what exactly is high-altitude testing, and why does it matter?

At higher altitudes, air tends to be far less dense, which makes combustion somewhat difficult for jet engines like the WS-15 afterburning turbofans used on the J-20. Thus, it makes sense to put the WS-15s through a rigorous testing regimen to root out any flaws or shortcomings and fix them prior to the J-20’s proposed service-entry in 2019. Fighters without engines that can function within the envelop of their thrust potential in thinner air above 20,000 to 30,000 feet are already at a severe disadvantage, especially compared to other fighters that can. The lower air density and, thus, low air pressure could also have an adverse effect on avionics, which tend to be placed in non-pressurized compartments; so that needs to be tested and observed as well. High-altitude testing also matters when it comes to determining maneuverability. Handling characteristics are vastly different at higher altitudes, at least for fighters with smaller wings and control surfaces than larger passenger airliners, and thus, flight test engineers as well as test pilots need to gather performance metrics and data on how the aircraft flies when put through its paces above a certain altitude. Daocheng Yading Airport is approximately 14,472 feet above mean sea level (AMSL), and would thus seem fairly ideal as a high-altitude  testing ground for the J-20.

The J-20 isn’t necessarily China’s answer to a burgeoning Indian Air Force, however. With India moving to buy new fighters to augment its current forces, as well as develop its own fifth-generation air superiority aircraft, it would seem like China would eventually conisder standing up a  few squadrons of J-20s or Shenyang J-31 “Gyrfalcons”, the smaller counterpart to the J-20, near the Indian border. China’s larger concern, at the moment, are Taiwan and Japan, two of its oldest regional opponents. The Japanese Air Self-Defense Force (JASDF) is in the process of maturing its own fifth-generation test prototype, which will eventually turn into the next-level fighter the JASDF has been trying to procure for the past decade. It would make more sense that China would attempt to use its J-20s and J-31s, when they reach full rate production levels, as a counter to the JASDF. As it is, China and Japan have had a fairly rocky relationship over the past ten years, with constant Chinese incursions into Japanese-claimed sovereign airspace; these incurisions are always countered with JASDF F-15, F-2 or F-4 fighters.