On June 2nd of this year, US Marine Captain Jeff “Kooch” Kuss, the Number 6 pilot for the US Navy’s flight demonstration team – the Blue Angels – was tragically killed when his F/A-18C Hornet crashed during a practice run at an airport near Smyrna, Tennessee. Kooch was unable to eject in time and thus went down with his jet. Today, the US Navy has made the findings of its investigation into the crash public via a Freedom of Information Act (FOIA) release requested by the Associated Press.

According to the report, the crash occurred due to pilot error right after takeoff during the first maneuver of Kooch’s routine. During a typical show, the Number 6 jet will take off and stay low to the ground, building up energy, before transitioning into a steep High Performance Climb (HPC) after which the pilot will pull into a Split S, the jet’s first maneuver of the show. To enter the maneuver, the Hornet needs to be flying at an airspeed between 125 and 135 knot, and the aircraft needs to be above 3500 feet AGL (above ground leve) at the very least. In this case, Kooch was traveling at 184 knots with his afterburners still selected (from the HPC), and transitioned to the Split S too soon, at 3196 feet AGL.

Simply put, he was flying too low and too fast. 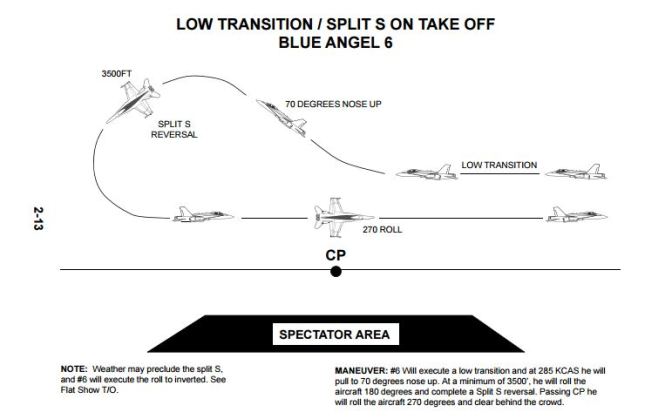 At the key moment when the Number 6 pilot is supposed to roll the Hornet, he’s also supposed to toggle the display controls on his Heads Up Display (HUD), lower the throttles of his aircraft and call out what he was doing over the radio. At that precise moment, Kooch did indeed call out what he was supposed to, but did not deselect his afterburners. His Hornet began to drop like a rock. Ordinarily, according to the Navy report, these dives are recoverable, especially thanks to the 3500 feet buffer that’s normally between the falling jet and the ground. However, in this case, Kooch did not attempt a recovery and impacted the ground, perishing immediately.

The Navy report stated that the F/A-18C  (BuNo 163455) which Kooch was flying that day did not have any preexisting mechanical issues, and was thoroughly checked and rechecked prior to the practice flights before the Smyrna airshow which the Blue Angels were supposed to headline. The Navy also found that the weather and the environment (i.e. terrain) the Blues were operating in was not adverse in any way that would have presented an immediate operational hazard to the team’s Hornets. Kooch did attempt to eject towards the very end of the Hornet’s dive, but was sadly too late.

Page 27 of the report also indicated that Kooch’s behavior prior to the flight was very uncharacteristic. He didn’t sign for his aircraft, as all Blue Angels pilots do before a flight, prior to taking off, and did not turn on his transponder though he was assigned a “squawk” code for the flight. Teammates noted that this was extremely out of the norm, especially as Kooch was viewed as one of the most meticulous and detail-oriented members of the team. This possibly points to fatigue being a factor in his loss.

The report was completed and submitted on August 25th. Among the many recommendations listed towards the end of the report is a review of the Number 6’s introductory maneuvers – the Low Transition/High Performance Climb/Split S. A previous mishap back in 2004 involved the Number 6 jet as well during the exact same maneuver sequence. The Blue Angels have since brought back Commander Frank Weisser as the team’s interim Number 6 “Opposing Solo” pilot; Weisser had previously served with the team between 2007 and 2009 before returning to the fleet.

10 thoughts on “The US Navy Has Concluded Its Investigation into the Crash of Blue Angel Capt. Jeff Kuss”