By Jan Mack, Ethan Garrity and Tom Demerly for TACAIRNET.com.

I never thought it would be this… violent. Brutal.

A full-scale simulated aerial battle to the death fought at low altitude over the Mojave Desert.

It is the day before the annual Aviation Nation airshow at Nellis AFB outside Las Vegas, Nevada. I’m here with a team from TACAIRNET.com that includes two photographers and pilot Ethan Garrity. This is media day. We are watching pilots from the 65th Aggressor Squadron based here at Nellis perform a demonstration of basic ACM or “Air Combat Maneuvering”. ACM is a complex set of air-to-air tactics designed to give U.S. Air Force pilots an edge in aerial combat that means the difference between death and survival, victory or defeat.

I knew all this before I got to Nellis. What I didn’t know was how violent and deadly a low-altitude dogfight is when witnessed in person.

The spectacle and ferocity of this air combat simulation is shocking, terrifying- and thrilling.

The engagement will open with Aggressor F-16’s launching a simulated low altitude airstrike on Nellis AFB. The Aggressors mimic the tactics of any number of adversary nations. The performance of their F-16’s mirror several different opposing forces or “OPFOR” aircraft such as the Russian-built MiG-29 or the less advanced Chinese Shenyang J-8 and Mirage aircraft used by nations in the Middle East and Africa.

The demonstration scenario is not far removed from reality. If the U.S. were to secure an airbase inside a hostile region an enemy may launch airstrikes against that installation. During the first Iraq war RAF Tornados launched daring low-level attacks on Iraqi airbases using the MBDA Durandal runway denial weapon. In July of 1967 Israel launched a series of simultaneous surprise air raids against air bases in Egypt, Syria and Jordan. They caught the Arab air forces on the ground, and decimated them. In an operation hauntingly similar to what we are about to see Israel destroyed over 400 Arab aircraft before they could get in the air.

There are two USAF F-15C Eagle air superiority aircraft flying CAP or Combat Air Patrol 20,000 feet above us. Two more Eagles sit at the end of the runway on alert status, prepped for takeoff. The alert pilots are in their aircraft or nearby ready-rooms in shifts. They can be airborne, in the fight, in minutes. With the Eagles above us and the alert status Eagles on the ground this is a giant steel-jaw trap waiting to be sprung. It seems safe.

The desert is quiet. Hot. No wind. Very little traffic on the I15 freeway running north out of Las Vegas. This is where aircraft spotters come to see the exotic aircraft that participate in the Red Flag exercises. But today it is war, or, at least, simulated war.

At Red Flag air-to-air training engagements unfold at high altitude over tens or even hundreds of miles of open desert. Frankly, there isn’t much to see. It is like a series of brief duels between distant snipers.

Today at Nellis it will be different. Nellis is backed up to a low desert mountain range that forms a sort of amphitheater. It’s a natural arena not unlike the ones Roman spectators packed to witness death duels between gladiators. We’re seeing an updated version of this violence for spectacle today. This aerial engagement won’t be like snipers exchanging shots from a distance. This will be a knife-fight in a phone booth fought with the most advanced operational combat aircraft and most skilled pilots in the world.

I thought there would be noise. But instead, there is only the silent terror of realizing we are under attack, and realizing it is too late.

Converging simultaneously from a concealed canyon to the north and from out of the sun to the south west two F-16 Aggressors hurtle at near Mach speed a few hundred feet over the desert. They cross the main runways at Nellis, a perfect hit on their first simulated attack run. They achieve surprise by infiltrating the area at extreme low altitude and high speed where they can hide from most radars. Their simulated air-to-ground weapons strike the center of the runway. In a real attack they would crater the runway and render much of it unusable. The thunder of afterburner sound follows just as the bombs go off. Air raid sirens blare.

High above us and on the runway in front of us the aerial trap has been sprung.

The F-15 Eagle is equipped with an advanced AN/APG-70 radar that has “look down/shoot down” capability. It can pick out small low altitude moving targets from high altitude. The  Eagles flying Combat Air Patrol (CAP) above us have already acquired the attacking Aggressor F-16’s.

The Aggressor F-16’s are painted in wild camouflage schemes that mimic those of foreign countries. They wear red stars on their wings despite official claims that the aircrafts’ markings are not intended to directly represent a specific adversary nation.

Other adversary aircraft are here at Nellis also for Aviation Nation. Nellis is at the outer edge of one of the largest air combat training ranges in the world and the aggressor squadrons of both the Air Force and Navy flock here for the most realistic combat simulations in the world. Short of seeing an actual air war, there is no other experience like Nellis and the Aviation Nation airshow here.

Rolling on their backs and entering a near vertical dive the F-15 Eagles plummet, using their massive twin engines in afterburner to gather slashing speed as they hurtle down on the attacking F-16’s. On the ground two alert F-15C’s taxi at high speed directly onto the runway. They do not hold short but immediately engage their afterburners and leap off the shortened, smoking runway in only a few hundred feet.

The fight is on.

The Aggressor F-16’s got in two attack passes, exactly one too many for any hope of escape, or survival.

The first pair of Eagles catches an F-16 as he enters his second attack run. He realizes he has been jumped, firewalls his throttle and hauls back on his side stick. A line of white-hot magnesium flares burst from his belly in an attempt to confuse infra-red heat seeking missiles.

One Eagle feints low while another circles out wide and high in the complex three-dimensional geometry that is modern dogfighting. As the Aggressor F-16 climbs he is sandwiched between the two Eagles- and killed with a burst from their 20mm cannon or a highly agile Sidewinder heat seeking air-to-air missile. He leaves the fight.

The Eagles perform a rejoining maneuver, one circling behind a low desert mountain to the west. When he emerges, the second F-16 is on his tail trying to get a missile lock. Hunter becomes the hunted.

The deep, hollow thunder of two jets trying to kill each other floods the rock canyon. They enter a horizontal scissors maneuver, the trailing F-16 overshoots the F-15 as soon as his giant air brake is deployed from the top of the flat fuselage. 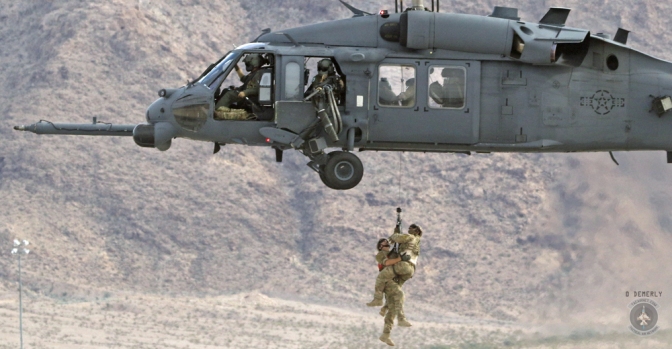 The aerial combat simulation closes with the Aggressors being shot down or run off. The show transitions to a demonstration of the rescue of a downed airman by Air Force Special Operations personnel, including their HH-60G Pave Hawk helicopter, the most advanced version of the Blackhawk.

The show at Nellis continues with a demonstration of Terminal Air Control Party (TACP) capabilities as an elite team of special operations airmen race onto the airfield to simulate directing airstrikes by A-10 and F-15E Strike Eagle attack aircraft.

No airshow in the world demonstrates current U.S. tactical air doctrine more completely, and in more spectacular fashion than Aviation Nation at Nellis AFB. Show admission is free to the public and upgraded flight line seating is available with some flight line chalets offering excellent food and drinks throughout the day. Aviation Nation joins the Paris Airshow and the Royal International Air Tattoo (RIAT) as one of the greatest airshows on earth but with an edgy, operational feel not seen at commercial airshows. Because of Nellis AFB’s close proximity to Las Vegas it is one of the best airshow destination trips in the world, with incredible flying during the day and famous Las Vegas fun and entertainment at night. The only problem is getting enough sleep! If you have the opportunity to see Aviation Nation at Nellis AFB you will be thrilled and impressed.

One thought on “Into The Kill Box”