The Ayres Thrush is a fairly popular cropdusting utility aircraft throughout the United States, and even parts of Canada. Small, affordable and rugged, it can spray down massive fields with chemicals and pesticides in a matter of minutes for a nominal operating cost. IOMAX USA is taking the Thrush a step further by adding on a versatile combat suite that’ll allow it to engage more than just crop-eating insects and pests.

The North Carolina-based company takes Thrush S2R-660 airframes, renames them “Archangels” and revamps them to be able to fly light air support operations using a variety of guided munitions, including GBU-58 Paveways, GBU-12 Paveway IIs, AGM-114 Hellfires, and Cirit 2.75″ laser-guided missiles. For the most part, you’d probably expect to see these on frontline attack aircraft and helicopters, and not on a bird that’s designed to fly, fight and win against the dreaded catalpa Sphinx caterpiller, or hose down a field with chemical fertilizer from above. 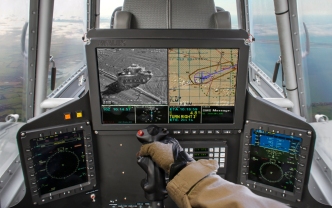 The interior of the Archangel looks more like the cockpit of a fighter jet than what you’d find on a small civilian bug-smasher. It comes standard with a heads-up display (HUD) and glass multi-function displays (MFD) in the front cockpit, and a large-area display (LAD) in the rear, as well as an avionics suite which allows it to perform ISR (Intelligence, Surveillance, Reconnaissance) missions in addition to air support. The powerplant is a single Pratt & Whitney PT6A, and the aircraft can fly up to 25,000 feet (with oxygen), integrate with modern military satellite communications networks, engage and jam enemy search radars, and pretty much everything else you’d be able to do with an Apache gunship. On top of that, in ISR mode, it has an endurance of 10 hours on internal fuel stores.
While the Archangel doesn’t really measure up to the aircraft fielded by modern western air forces that fly the same missions, it’s still a very effective low-cost variant for smaller countries that can’t afford a fleet of A-10 Thunderbolt IIs, or AH-64D/E Apaches. Case in point- the Yemeni Air Force has already started using similar aircraft in strikes against Daesh (ISIS) in the Middle East, and to great effect!
Read more on the Archangel: HERE
Please note that this article is not in any way, shape or form an endorsement of IOMAX USA or any of its products.