One of the most prolific and successful combat aircraft in history, the McDonnell-Douglas F-4 Phantom II, flew its final airshow demonstration for the U.S. Air Force at the November 12-13 Aviation Nation airshow at Nellis AFB outside Las Vegas, Nevada. The show was attended by an estimated 300,000 people according to Nellis AFB public affairs.

The legacy of the F-4 Phantom II is a major milestone in international aviation as a multi-role combat aircraft employed by at least a dozen countries. The Phantom II flew for the U.S. in combat operations from the Cold War to Vietnam, and Iraq, an operational legacy that spanned a remarkable 58 years. As a versatile twin-engine multi-role combat aircraft it was employed operationally by the U.S. Air Force, Marines and Navy.

Approximately 5,200 F-4 Phantom II’s were produced in at least 23 variants during its operational history. The aircraft remains in limited service with Iran, Egypt, Israel, South Korea, Turkey and Japan. One of many distinctions the F-4 had in U.S. service was its use by both the Blue Angel and Thunderbird jet demonstration teams, the only aircraft type to be flown by both teams, and at the same time.

The last airshow demo showcased several unique characteristics of the F-4 including some that contribute to its obsolescence and others that made it a state-or-the-art multi role combat aircraft for decades.

The F-4 left noticeable smoke trails during some of its demonstration routine. During the Vietnam conflict North Vietnamese anti-aircraft gunners learned to track the F-4 from its dark smoke trail. This vulnerability lead to the development of nearly smoke-free jet engines for the F-15, F-16 and every modern tactical aircraft after the F-4. In demonstrations of newer aircraft at Aviation Nation following the F-4 the difference in jet exhaust was easy to see.

The F-4 was well-suited for carrier based and forward area operation because of its reliable twin engine configuration and redundant flight controls with a two-man crew. It took years to develop more dependable, light weight, high thrust tactical jet engines that could replace the Phantom’s twin General Electric J79 axial-flow turbojets with a single engine like the Pratt & Whitney F135 used in the F-35 Lightning II also demonstrated at Aviation Nation.

Cockpit design and avionics in the F-4 Phantom II also greatly influenced design in 5th generation combat aircraft like the F-35 Lightning II. The F-4’s cockpit was crowded with analog flight monitoring and control instruments and was made even more complex with a vast array of sensor displays and warning devices. Vietnam era F-4 pilots coined the term “task saturated” when they selectively ignored some aircraft warnings and instruments in favor of concentrating on weapons delivery equipment during an attack run. When you look at the cockpit of a late model F-4 crowded with upgraded navigation, communication and targeting/threat warning gear compared to the clean, uncrowded cockpit of a modern F-35 the difference is remarkable.

Perhaps the most remarkable part of seeing the F-4 Phantom II fly at Aviation Nation/Nellis AFB was being able to watch the progression of aircraft evolution from the P-51 Mustang to the F-86 Sabre and T-33 trainer through the F-4 and then on to the F-15, F-16 and finally the new F-35 Lightning II. It’s unlikely this wide spectrum of jet aviation history will ever be seen at a single U.S. military airshow again.

Because of the historic combination of aircraft and this being the last Air Force F-4 flight demo the photo areas were packed at Nellis.

Photographers and airshow spectators were treated to a brilliant display of the F-4 with multiple passes in the clean flight configuration, with afterburners lit and a dirty pass with landing gear and carrier arrestor hook deployed. While the flight demo didn’t push the envelope of the rather tired example being flown it did provide remarkable photo passes for the thousands of cameras focused skyward for this beautiful final flight. For a special treat the F-4 taxied directly in front of the crowd line trailing its age-yellowed drag chute and with the cockpit canopy open so the flight crew could salute the crowd one last time.

Both before and after the flight demos on each day Lt. Col. King and retired Lt. Col.  Harkins spoke to aircraft enthusiasts and former F-4 flight crews who had traveled from around the world to see the historic final airshow demo. The crew signed prints and photos of the F-4 and discussed the last month of its flying operations before final withdrawal from U.S. Air Force service. 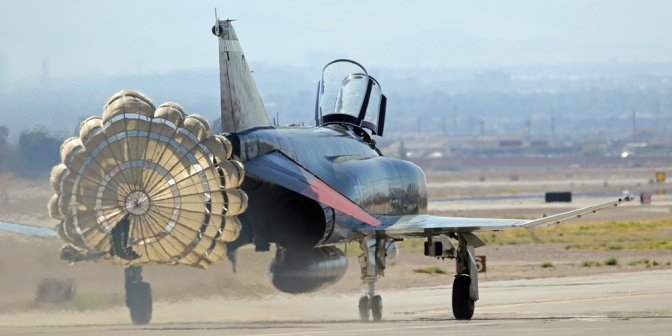 The F-4’s retirement signifies a milestone in military aviation from the “stick ‘n rudder” days of jet aviation at its height to a new era of flight control and mission execution automation that some analysts believe may actually take the pilot out of the cockpit altogether.

As significant as the technical ramifications of the F-4’s retirement, the human legacy the F-4 Phantom II leaves behind is one of the most significant of any aircraft type in history, in comparison to now-classic planes like the P-51 Mustang. Entire careers were built around the F-4, and this final Air Force demo at Nellis was a fitting tribute to the end of those thousands of careers in aviation and support built around the F-4 Phantom II.