Fifteen years ago on the morning of September 11, a pair of single-seater F-16 Fighting Falcons of the New Jersey Air National Guard were simulating air-to-ground strikes over the Pine Barrens in southern NJ when their communications gear urgently lit up. The Vipers, belonging to the 119th Fighter Squadron of the 177th Fighter Wing, were unarmed and up for a routine training hop, which would be followed by a debrief, then a filling lunch. A stream of barely decipherable radio chatter erupted in their pilots’ helmets. These two pilots were completely unaware of what was unfolding in nearby New York City, just a few minutes away by air, but they would soon be brought to speed by ground control on the situation. They were immediately recalled, and another set of 119 FS Vipers were brought out and armed for combat on the tarmac at Atlantic City International Airport, home of 177 FW.

Meanwhile, north of New Jersey, a pair of F-15C Eagles silently sat in their hangars at Otis Air National Guard Base in Massachusetts. The two pilots assigned to alert duty for the day at Otis were Lieutenant Colonel Timothy Duffy and Major Daniel Nash of the 102nd Fighter Wing; both very experienced F-15 fighter pilots. The Northeast Air Defense Sector (NEADS), at approximately 8:30 AM made Duffy aware of a possible scramble order. Word had broken out that an airliner, American Airlines Flight 11, had been hijacked and an intercept using the two alert F-15s would be likely. Duffy phoned up Nash, who was in his office at the time, relaying what he had heard.

Duffy and Nash donned their g-suits and grabbed their helmets in a hurry before jumping in a pickup truck which would take them to their waiting Eagles. Support teams and crew chiefs milled about the hangars, hooking up missile pylons to hardpoints underneath the wings of the two powerful air superiority fighters, attaching air-to-air missiles to their stations while double-checking their work as quickly as possible. Then, the order nobody at Otis wanted to hear blared over the public address speakers:

Duffy and Nash, both excellent pilots and good sticks by all accounts, quickly ran their jets through the startup procedures and had the engines turning and burning within minutes. The scramble order sounded in their headsets, and the control tower had already cleared all taxiways at a runway for their departure. Pushing out, Duffy and Nash were focused on the mission that now lay ahead. Neither had ever been tasked with intercepting a civilian airliner before today.

In less than three minutes, the two roared to the skies over Massachusetts, firing up their radars while military air controllers vectored them towards Flight 11 which was now thought to be deep inside New York City’s airspace. Its transponder was off and air traffic controllers weren’t very sure of its exact location.  Given the urgency of the situation, NEADS cleared the airways ahead of PANTA flight and authorized them to go supersonic so that they could reach New York, to their south, as fast as possible. Time was of the essence and Flight 11 had to be found fast before something happened.

Tragically, they didn’t scramble in time. The F-15s had taken off at 8:46 AM, right when Flight 11 flew into the North Tower of the World Trade Center in Lower Manhattan. 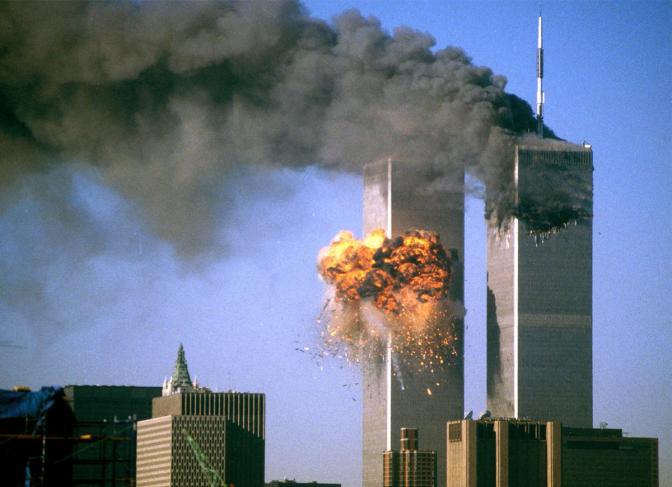 Seeing a massive plume of smoke stream out of New York, just a few minutes out, the two F-15 pilots knew the worst had happened. NEADS controllers, thoroughly disoriented by what had just taken place, ordered PANTA to orbit over Long Island, east of New York City, while they quickly figured out a course of action.

Major Kevin Naspany, the weapons team commander which exercised tactical authority over PANTA flight was asked what the next appropriate course of action was, given the two fully-armed F-15s minutes away from the site of the first attack.

“Send ’em to New York City still. Continue! Go! This is what I got. Possible news that a 737 just hit the World Trade Center. This is a real-world…Continue taking the fighters down to the New York City area, JFK [International Airport] area, if you can. Make sure that the FAA clears it—your route all the way through…Let’s press with this.”

At 9:03 AM, air traffic controllers watched in silent horror as the blip on their displays denoted as United Airlines Flight 175 disappeared over Lower Manhattan as well. At 8:51 AM, Flight 175 started deviating from its pre-planned route to Los Angeles, veering towards New York City. Passengers aboard the Boeing 767 had made numerous calls to loved ones using the the satellite phones available in first class, tearfully saying goodbye one last time. Flight 175 was flown directly into the South Tower of the World Trade Center. This attack was caught on live television.

Duffy and Nash, now seeing even more smoke than before, were contacted by their controllers. They were to immediately secure the airspace over New York City, establishing a combat air patrol. Any and all aircraft that did not have an NEADS-sanctioned reason to be there were to be forced out, and should they not comply, shot down.

America was under attack.

By 10:30 AM, back at Otis in Massachusetts, all available fighters were brought out and armed in a hurry. Six F-15s out on a training exercise were recalled to base. In the confusion after the World Trade Center attacks, some of these fighters were launched with insufficient weapons loads. Their pilots now knew that the only option they had once their missiles ran out was to sacrifice their lives and ram any hijacked airliners to deny the terrorists aboard the ability to attack more ground targets.

At Andrews Air Force Base in Maryland, close to Washington DC, the 121st Fighter Squadron of the District of Columbia Air National Guard was readying its own F-16s for immediate launch. Ground crews hustled to load up their Vipers with AIM-9 Sidewinder short-range air-to-air missiles while four of the squadron’s available pilots raced to get their gear on and over to the ops desk for their aircraft assignments. The first two of the four ready jets were loaded only with non-explosive training rounds, though two of the scrambled pilots hopped in and took off anyways, knowing that their presence over DC was absolutely necessary one way or another, with the other F-16Cs ten minutes behind. The first two pilots were more than aware of the fact that in the event they’d have to engage another aircraft, their best bet at accomplishing the mission was to use their own jets as missiles, just as some of the Massachusetts Air National Guard F-15 pilots had realized earlier. Hitting an engine and ejecting  would be out of the question, according to flight lead- Marc Sasseville. The aircraft could still potentially fly with the other engine, or glide to a target of opportunity. No – they would have to ram the aircraft completely, giving up their lives in the process.

At 9:37 AM, American Airlines Flight 77, a Boeing 757, flew low and fast into the Pentagon, home of the Department of Defense in Arlington, Virginia. Thick black smoke began to rise from the west face of the building. All aboard the 757 and more inside the building were killed on impact. The President of the United States, at the time in Florida, was notified of the attacks. The attacks weren’t over just yet, however. A United Airlines Boeing 757, scheduled to fly from Newark, New Jersey to San Francisco, California, had lost contact with air traffic controllers. At 10:03 AM, it disappeared from radar displays in Cleveland, Ohio, where the unresponsive aircraft was being tracked. 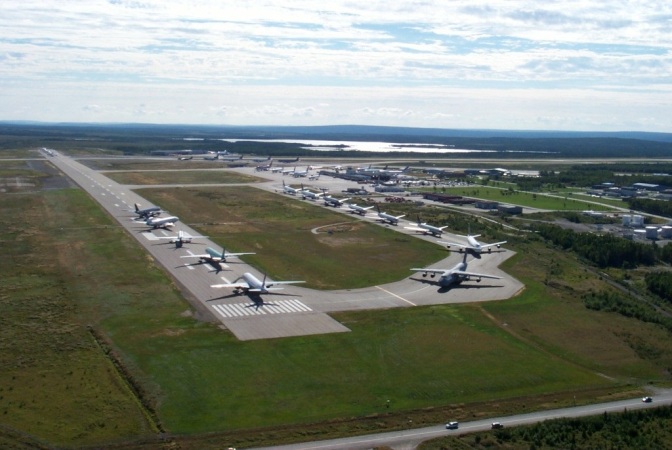 North of America, Transport Canada kicked into high gear, bringing online its Situation Center (SitCen), and quickly organizing together the country’s relevant services and departments for a coordinated effort to support the US government and military in whichever way possible. When notified of the Federal Aviation Administration shutting down all airspace over the United States, Operation Yellow Ribbon went into effect. Canadian airspace was concurrently shut down, and all Canadian airports were only allowed to accept incoming flights originally scheduled to land at American airports. Additionally, they would function as necessary for police and military aircraft staging. Around 500 flights inbound to the continental United States were diverted to runways around the country, depending on their flight time and how much fuel they had left aboard. Airports and Canadian Forces Bases on Canada’s east coast took in as much as forty or more flights with large widebody airliners lined up on ramps and even runways, when space ran short.

The generosity spirit of America’s northern neighbor was brought out in a big way. Canadians in the small towns and cities adjacent to the airports and bases which had received all diverted flights to the United States made provisions to shelter and feed the displaced travelers, many of whom were worried sick for the conditions of their loved ones. Entire communities came together to welcome these total strangers, to give them a temporary home and to take care of them while the US military secured the country and ensured the terrorist attacks were over.

The fog and confusion surrounding the attacks hadn’t yet lifted, however.

On September 10, the previous day, the USS Enterprise (CVN-65) was passing through the Strait of Hormuz on its way to Cape Town, South Africa. It had recently finished off a deployment to the Persian Gulf and was on its way home, having been out of its home port since April that year. When the news came through on the televisions aboard the Big E, sailors and Marines stood gaping at the screens, shock painting their faces. Horrific images of people jumping from the towers to escape the flames marred the television sets on the mess decks. Commissioned and enlisted personnel alike were frozen in horrified silence, watching and listening to newscasters attempt to convey the situation in the United States.

Within minutes, the Big E’s commanding officer made an announcement on the ship’s public address system. He had ordered the ship to be turned around and brought back to their previous operating station in the Persian Gulf, where they would wait ready to do combat as soon as the call came. Voices of dissent were entirely nonexistent. The Big E executed a banking turn, outrunning her escort vessels which were already in the process of turning around to do the same. The October after the attacks, flight operations conducted from the Enterprise saw the expenditure of 800,000 lbs of munitions in a blistering aerial campaign against Taliban and Al Qaeda strongholds and training camps around Afghanistan.

While 9/11 was a time of tragedy and immense sorrow, we shouldn’t forget the actions of those who immediately answered the call to serve and defend on that day. The sailors and Marines aboard the largest combat vessel in existence, immediately turning their ship around to do battle with those who wished to visit terror and harm upon their countrymen and women, the first responders who rushed towards the smoke and flames to save lives, the residents of small, sleepy towns who disregarded their personal comfort and did everything they could to help stranded travelers trying to get back the US, and the pilots who were ready to engage any hijacked aircraft with their fighters, even though it would likely mean them having to sacrifice their lives in the process.

It’s very comforting to know that brave men and women stood (and still stand today) to defend us no matter what, even if it means that they might not make it home from their mission.

This article was originally published, by the same author, on Alert5.net, the predecessor to the Tactical Air Network.

2 thoughts on “Remembering the Defenders: North America’s Military Response to 9/11”